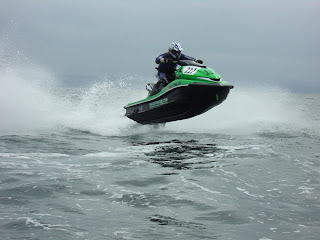 Robert Carreon, Southern California
Primary Race Craft: 2007 Kawasaki ULTRA 250X
Robert is a proud husband, and proud father of 3 wonderful children. He holds a Bachelor’s Degree in Technical Management and has worked for a Fortune 500 company for the past ten years. Robert is a highly competitive and determined individual and harbors an intense commitment to being the best that he can be, on and off the water. Robert started riding jet skies at the age of 32 and immediately fell in love with riding. He would ride as often as possible. After about a year of recreational riding, he decided to take his passion to another level and start racing. Robert has been fortunate to have the encouragement from his fellow riders, who have mentioned that he has a natural talent for riding offshore. Robert has a smooth, natural riding style. This style also helps his stay fresh during a race which allows hi to always finish strong. Robert did his learning on the Kawi 1500 hull, a great boat to learn on as it takes a pounding offshore. Robert has learned when to be more aggressive and when to ease up which allows him to maneuver around racers when the opportunity presents itself. Robert has upgraded to the Kawasaki ULTRA 250X and has never looked back.

Robert Transitioned to PROAM1 in July of 2008

2008 Race Season: The 2008 race season will start for in late February with the Fourth Annual Mark Hahn 300 Lake Havasu. The Mark Hahn 300 is an endurance race testing a rider’s stamina, watercraft, and pit crew. The media coverage is expected to be over the top for this race. Magazines from Japan, France, England, Germany, and USA will be on hand to cover the race. Robert has plans to race in the 08 LB2CAT, Long Beach Sprint Nationals, San Diego Thunderboat Regatta. He is also planning on racing several of the RPM races, DJSA races, and APBA Regional as well as one National race in Parker Arizona. In total, he plans on racing in eight-to-ten events throughout the year. 2008 Goals: Place within the Top 3 of his class in each race he enters. In addition, he intends to finish in the top 10 for the LB2CAT, as well as the Mark Hahn 300. To do this, he must be in shape, practice weekly, have a reliable ski, and a great support team. Another goal of his is to qualify for the World Finals at the end of the year. Current Sponsors: PWCOFFSHORE.com, R&D, Saints an Sinners Apparel, Hydro-Turf
click on http://www.pwcoffshore.com/ for more information regarding the PWCOFFSHORE Sponsored PWC Endurance Racers
Posted by PWCOFFSHORE at 11:01 PM