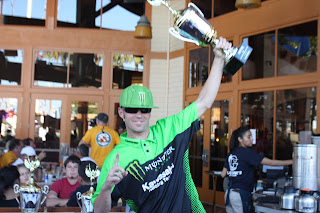 The 2009 Long Beach to Catalina and Back APBA Offshore National Championship Race orchestrated by R.P.M. Racing Enterprises is in the books and Craig Warner and Monster Kawasaki take home back to back offshore National Championships. Not since legendary offshore racer and sole PWCOFFSHORE Hall Of Famer Billy Womack has any racer won two in a row. Kawasaki further solidified its dominance in offshore racing with the second year of sweeping the podium with 1st, 2nd and 3rd place finishes on Kawasaki platforms. It appears to be official, for now the Kawasaki ULTRA250/260X platforms own offshore racing.


Some of the biggest names in offshore racing gathered with R.P.M. Racing Enterprises around the historic Queen Mary at 8 am on July 12, 2009 to take on the challenge and test their metal with some of the best offshore racers in the world. The "LB2CAT" is a trek just under 60 miles round trip from Long Beach to Catalina Island & back across the treacherous channel waters on PWC/Jet-Skis. The racers take on the mighty Pacific Ocean and shipping channel that presents wind, kelp, rollers, chop and navigation to the racer to assess and overcome. The racers that participate in this race come prepared looking like linebackers with helmets, neck collars and and mouthpieces to hold 75 to 80 mph watercraft wide open throttle (WOT) across the channel and back, a true test of physical strength and mental stamina. This epic and historic race attracts the truly hard core pros and enthusiasts to pursue the prestigious win and membership into the "Platinum Club" of offshore racers who win the overall. Honda came with their guns loaded with Honda sponsored racer Nick Vanis, Monster Kawasaki brought World Champion and returning offshore defending champion racer Craig Warner, PWCOFFSHORE Racing had their team prepped and ready to pursue a win with recent Mark Hahn 300 winners Mark Gerner and Robert Carreon in the PROAM class, there were a number of bone stock SeaDoo IS craft in the mix, one ridden by PWI's Kevin Shaw and the new Yamaha FZR also debuted with two participants choosing it as their weapon of choice for the day.


Over 40 craft hammered throttles for the straight line start out of Queen's Gate providing spectators lining the rock wall with a site to be seen. The adrenalin and horsepower junkies of our industry were in bliss with the sound and site of 1000's of horsepower roaring out of the hole, it was enough to get your blood rolling to say the least. Pat Roque's tweaked out SeaDoo sounded like a Boss 302 with headers and Craig Warner's magnificently tuned ULTRA260X looked and sounded like a rocket screaming across the water. Robert Carreon's green ULTRA screaming out of the hole as it always does is a site and sound to enjoy. Many eyes were on Lee Phan of Southern California this year, Lee was the recent winner of the Dana Point to Avalon Offshore Sprint Race and brought an extremely fast ULTRA to the race. The combination of his offshore riding prowess and fast craft made him a formidable opponent for any racer on that day. The conditions were relatively flat for the indoctrinated with two to three foot rollers with chop outside the break wall, not enough to slow those craft prepped for a flat day but enough to allow the rough water craft to compete and flourish. Conditions close to Catalina Island and Avalon Harbor were mild resulting in a throttle run just outside the island and the first leg on the return trip.


The 2009 LB2CAT saw new race classes instituted by Ross Wallach of R.P.M. Enterprises; a new Military Class, a Manufacturer's Bone Stock class and a Challenged Athlete Class. Former Marine Corps Drill Instructor and competitive boxer Mike Arnold (all 6ft 3in and 250 pounds of muscle) debuted for his first offshore race competing against former Marine Russell Libby, both would put on an impressive display of racing with "Iron-Mike" Arnold edging out Russell Libby for the Military Class win. The new Manufactures Bone Stock Class pitted Shawn Alladio of PWCOFFSHORE on the Kawasaki ULTRA250X competing against multiple racers including the new RXTIS ridden by Kevin Shaw of PWI. Shawn Alladio put on an impressive performance and while in 5th place overall and right outside the Queen Mary on the final leg her entire steering column literally ripped off the craft propelling her over the handlebars for a very nasty toss. This allowed Kevin Shaw to capitalize on his RXTIS and pass Shawn for a very impressive top 10 overall finish on the SeaDoo RXTIS winning the Manufacturers Stock Class. PWI would have a good day with two of their team making it into the top ten. Shawn Alladio was able to slowly manipulate the craft across the finish line using her bodyweight and legs to steer the disabled craft, using nothing short of sheer willpower to get the craft across the line and avoid the DNF.


The challenged athlete class was a highlight for the day, truly an inspiration for all who observed the race. Warren Frank is a below the knee amputee and athlete who runs triathlons and participates in other forms of endur 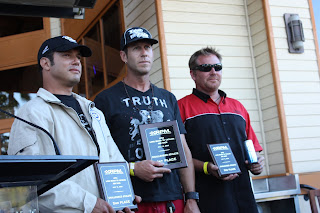 ance racing. Driven is an understatement with Warren, he trained with intensity for this race and it showed on the race course. He also made a last minute boat change with the purchase of the ULTRA260X. Warren Frank's performance was impressive and challenged all on the course on that day. Equally impressive is Ryan Levinson, a challenged athlete with FSH Muscular Dystrophy (FSHMD), an incurable, untreatable, muscle-wasting disorder. Those who trained with Ryan in preparation for the race were awestruck with this athlete's strength of will and character. His form was impeccable on the craft, a testament of Shawn Alladio's instruction. Shawn Alladio spent countless hours working with these challenged athletes in preparation for the race. Mark Gerner of PWCOFFSHORE Racing also trained with Ryan Levinson just prior to the race and described the experience as "humbling and inspirational." Ryan Levinson will never acknowledge that it could and likely is very painful for him to ride in the demanding offshore PWC racing niche. Not once did he complain, never did he falter, never did he show weakness. The challenged athletes at the

2009 LB2CAT represented themselves extremely well. One word describes them, awesome. We suggest you go look at their sites: www.ryanlevinson.com www.warrenfrank.com


The Sportsman Class is designed to allow first time offshore racers to come participate at a reduced rate and is the fastest growing class on the roster. Dave Szych of PWI took the Sportsman class, Jim Walker put in an impressive performance racing a SeaDoo RXT winning the Amateur Class and Iron Man Triathlete Kim Bushong of PWCOFFSHORE put in a very impressive performance on this Kawasaki ULTRA250X taking the Vet Master Championship and 4th overall spot. Tyler White of Texas made the trek up to race his RXTX only to encounter a major mechanical during tuning the day before the race that took his craft out of contention for race day. Many scrambled to get him a loaner craft and a stock RXTX appeared resulting in Tyler taking 6th overall on a loaner craft!! How about that! Tyler was accompanied by his father Doug White, a class act and supporter of the offshore racing community.


Craig Warner's performance was dominant beating second place overall finisher and PWCOFFSHORE founder Mark Gerner by two minutes. Warner took the lead quickly at the start and then kept the lead throughout the entire race. Paul Pham was in second but was tossed in mid channel off of his SeaDoo RXT. Mark Gerner and Chris Heinrich battled the entire race with Gerner edging out Heinrich at the very end of the race. The race was plagued with DNF's (Did not finish) due to mechanicals, a testament to the racers continuing to push the horsepower envelope to achieve the speed required to win this race and then pushing that craft to its breaking point during the race. That point of diminishing return of speed vs. reliability is ever-changing and elusive. Many were performing well when their craft had issues, heartbreak was rampant at this race with many racers who had prepped for months (in some cases a year) only to find themselves drifting in the channel with a grenaded engine. After that reality settled in, the race was over and everyone was back on land in one piece, the offshore fraternity and comradery was there with old friends talking and enjoying the great community this niche displays. That is the nature of this epic race. Many of these competitors will be back next year to take on the challenge of the Pacific yet again. The LB2CAT lived up to all its expectations yet again. Congratulations Kawasaki!


PWCOFFSHORE.com took hundreds of pictures, generated great video from their helicopter and has engaged Hypnotic Films to create a DVD for the race, stay tuned and watch www.pwcoffshore.com for updates on the DVD!
See you on the water.
www.pwcoffshore.com

Posted by PWCOFFSHORE at 1:04 PM