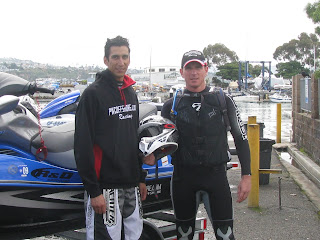 Fly Racing is pleased to announce the signing of Team PWCOFFSHORE.

PWCOFFSHORE is the premier offshore endurance watercraft racing team based in Southern California. The Team will wear Fly Racing’s lightweight helmets during its quest for offshore event wins and championships.

"I am very excited to have such a professional team with Fly Racing,” states Fly Racing’s Rich Kumm. “PWCOFFSHORE is the kind of team that will help the sport as well as local communities."

“I'm excited about this new relationship with Fly Racing. After reviewing their product line, I am extremely impressed with the quality and great looks of Fly's gear,” states Mark Gerner of PWCOFFSHORE. “I am very pleased to have the opportunity to wear Fly Racing products in the extremely demanding offshore PWC Racing niche. The gear we use needs to be the best the industry has to offer, I am confident Fly Racing's gear will fit right in!"

The offshore racers of Team PWCOFFSHORE have differentiated themselves with tremendous success in offshore and endurance racing, which has resulted in the very sought after selection to be one of the few PWCOFFSHORE Sponsored Racers. Fly Racing is proud to be on board as an official sponsor of PWCOFFSHORE and wishes all team members success in this year’s events.