Monster Energy Kawasaki Sponsored Racer Craig Warner of Southern California wins each of the three races of the TCO and sweeps the 2012 Triple Crown of Offshore Racing series. Never before has a racer won every round of the TCO and swept the entire series. Warner raced the Monster Energy Kawasaki backed Kawasaki ULTRA 300X and took the win of the final race of the series; The 56 mile Dana Point, Ca USA to Oceanside and Back offshore race and did so by a significant margin.

For more information regarding offshore racing, go to www.pwcoffshore.com
﻿﻿﻿﻿
﻿ 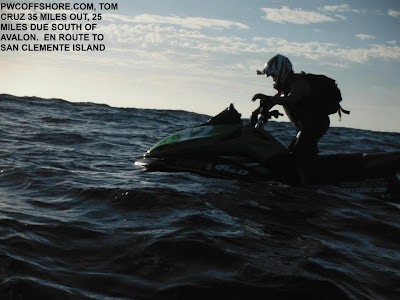 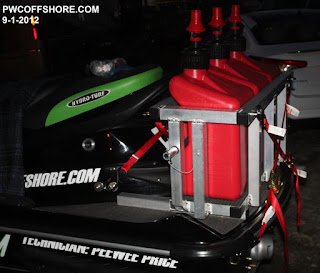 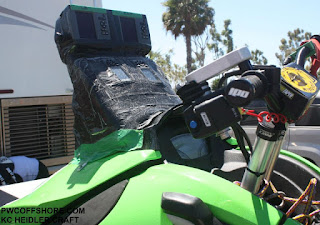 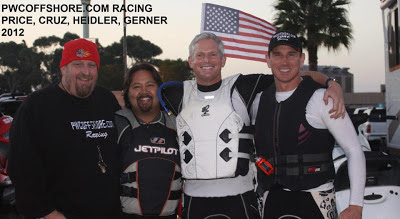 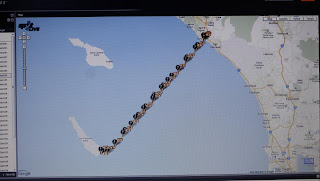 NOTE: WE ENCOURAGE YOU NOT TO DO THIS RIDE ON A JET SKI - SIGNIFICANT PLANNING AND COORDINATION IS REQUIRED - INDOCTRINATED AND EXTREMELY EXPERIENCED ONLY

September 2, 2012 5:45 am, Dana Point Harbor, CA: “Where you going today” says a stranger to Mark Gerner. San Clemente Island. “San Clemente island? On a Jet Ski?” Yes. “San Clemente? That’s like, over 60 miles offshore” Yes. “You have a chase boat, right?” No. “Are you going to Avalon, Catalina first?” No. “On a Jet Ski?” Yes. “Why not go to Avalon first, that’s like half way there right? “ Because we’re not aware of anyone that’s done this direct shot before from Dana Point to Pyramid Cove, San Clemente Island unassisted there and back. “Do you know there are probably 6-8 foot seas out there because of the hurricane?” Yes. “Do you have enough fuel?” Yes, we’ll be fine. Long pause from the stranger…….. With a little nervous laughter “You guys are nuts, be safe.” This will be good training - plus, we’re prepared, said Gerner.

That preparation was due in large part to three time Vet Master World Champion KC Heidler and technician Peewee Price.

9/2/2012: Three select racers from PWCOFFSHORE.COM plot a course from Dana Point tracking directly 61 miles across the open seas to the South Point of San Clemente Island, a military base approximately 30 miles beyond Catalina Island and 61 miles from Dana Point. The brainchild of three-time world champion KC Heidler of PWCOFFSHORE, Heidler’s original intent was to take the adventure all the way to Cortez Bank 100 miles offshore on Saturday, September 1. Unfortunately the hurricane, small craft advisory at San Clemente Island, 7 foot seas, white caps combined with the challenged manageability of the craft due to the weight of 46 gallons of fuel on the Jet Ski in that sea state resulted in the team opting to push the Cortez ride out and do a San Clemente Island ride direct from Dana Point.

Mark Gerner, KC Heidler and Tom Cruz launched from Dana Point to tackle the 122 mile pure “big blue” open ocean run direct from Dana Point California to San Clemente and back. Supported by Race Technician Peewee Price, the day started with a navigation and weather brief from KC Heidler at 5:15 am followed by launch. “It’s going to be a bumpy run out there guys” said Heidler. The team was underway by 6:30 am. The group would encounter 5-8 foot seas and white caps the entire way to San Clemente Island. It became especially intense at the half way mark approximately 20 miles due south of the South tip of Catalina Island with the southerly winds between the islands stirring up quite a mess of 8 foot steep waves. After over two hours of being hammered by white caps, 15 knot winds and 8 footers off the East side of San Clemente Island due to the residuals of the hurricane, the team arrived safely to rendezvous with their refueling craft “The Tranquilidad” – 60 ft. The Beneteau was anchored on the outer rim of Pyramid Cove on the South side of San Clemente Island and skippered by Jeremy Anwyl. The craft was equipped with aircraft grade fuel bladders and zuck up bibs for the team to refuel from. The sea state would involve less white caps on the return run with large swells, by no means flat but only a few white caps and following seas resulting in a significantly less eventful ride back compared to the exceptionally large & intense conditions on the way out.

Thank you Jeremy Anwyl for the great skipper support, thank you Salty! Captain Macc of SeaTow for watching out for us and the constant communication, Peewee and Brandy Price for the phenomenal preparation work and support.

Note to reader: San Clemente Island is a military training ground. There are parts of San Clemente that don’t allow boats within miles of the Island. There are times that San Clemente Island is completely closed within a few miles. Land access is not authorized (Stay off the island). Coordinate with their website prior to considering approaching the island on a boat of any size. WE RECOMMEND YOU DO NOT MAKE THIS RUN on a Jet Ski without a minimum of a decade of offshore experience on a Jet Ski, multiple ride partners, significant planning and redundant safety equipment.