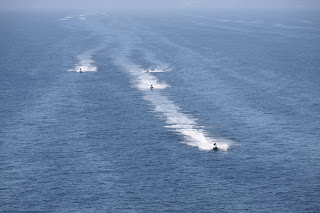 
How do you train for races?  Ride and then ride more.   Mountain Biking.  I hit the gym four to five times a week and ride the ocean at every opportunity I have.  Offshore riding is on weekends only, I have a demanding job and weekdays are focused on work, evenings are focused on working out.  My focus is on legs and cardio.
What are your greatest accomplishments in offshore racing?  Personal Accomplishments?  Yes personal Accomplishments.  I came close to winning the 2009 LB2CAT Offshore National Championship with a PROAM overall 2nd and overall 2nd place finish, but 2nd place is first loser and I was beaten by former World Champion Craig Warner.  I won the Triple Crown in 2009.  Winning the Mark Hahn 300 Mile Endurance Championship Race with my race partner Robert Carreon was a good day.  Taking the Iron Man at the Mark Hahn 300 was another good day.  Having broken my craft in every race in 2010, I am looking forward to a better performance in 2011.  The Kawasaki ULTRA 300X I have been riding and racing has performed well so far.  I am looking forward to the days, months and years ahead.

For those considering coming out and racing, what would you tell them?  What are you waiting for?  Life is short, come on out and have some fun!