The Dana Point to Oceanside & Back APBA Offshore PWC Race is November 1, 2009

The Dana Point to Oceanside & Back APBA Offshore PWC Race is November 1, 2009 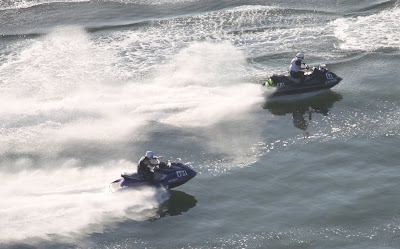 (photo http://www.pwcoffshore.com/)
RPM RACING ENTERPRISES is pleased to present The Inaugural Dana Point to Oceanside & Back APBA Offshore PWC (Jet Ski) Race, scheduled for November 1, 2009! This is the final race of the “2009 Triple Crown of Offshore PWC Racing" with Dana Point, Ca USA to Avalon and the Long Beach to Catalina & Back APBA National Offshore Championships being the previous two rounds. Multiple classes from Pro to Manufacturer’s "Bone Stock" are available to all takers who are welcome to participate in the 53 mile round trip open ocean race. Navigation, physical fitness and a reliable craft will be critical to success!

The chase for the Offshore Triple Crown is coming down to this final race, the competition is going to be tough with some of the best offshore racers in the world scheduled to participate!

Sean Conner of PWCOFFSHORE.com GUNZ Racing stated that “I am very excited to be racing down the California coastline and looking forward to competing against some of the best offshore endurance racers in the country, The Dana Point to Oceanside Race is going to be a true battle on the water for the Offshore Crown"

Shawn Alladio said “This is my 20th year racing offshore in the Pacific Ocean. I'm excited about the recent rise of interest in PWC Offshore racing here in Southern California. The final race of the 'Triple Crown' Offshore Series is the third trilogy of our Offshore heritage competing at the Dana Point to Oceanside and Back race, 55 miles of 'Hard Core Offshore'

Mark Gerner, founder of PWCOFFSHORE.com said “Offshore PWC Racing is back in the United States! I’m thrilled about this additional race and training hard for the competition. I am excited about the amount of talent that will be participating!” 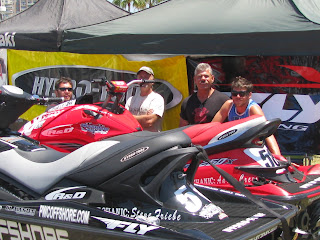 Tyler White of TAD Racing said "This will be my third time racing in the Pacific and I couldn't be more stoked. I'm looking forward to coming out and representing region five and the third coast once again in the 2009 Offshore Triple Crown race series. Its gonna be a grudge match. Look out California, Texas is a comin' for ya!"
See you there!

Check out the offshore only forum at www.pwcoffshoreforums.com 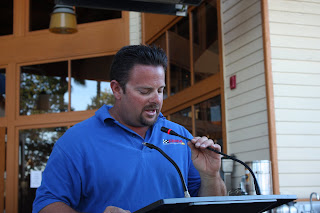 PWC Riders take on the open Pacific Ocean for a 280 mile ride along the California Coastline as a memorial fundraiser on behalf of UWSF surviving spouses of our fallen Special Operations Warriors since 9-11.

PWC Riders take on the open Pacific Ocean for a 280 mile ride along the California Coastline as a memorial fundraiser on behalf of UWSF surviving spouses of our fallen Special Operations Warriors since 9-11. 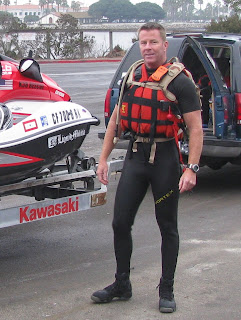 On 9/11/2001 our country was attacked by a group of terrorists. We must never forget. Since then, our military has been engaged in warfare to maintain our freedoms and keep our families out of harm’s way. We have lost great Americans while waging this war against terror. We must never forget......... We stand in awe and with the greatest respect of these great Americans who have made the ultimate sacrifice on behalf of our country.

The United Warrior Survivor Foundation is the only organization exclusively dedicated to serving the needs of the surviving spouses of Navy, Army, Air Force and Marine Corps Special Operations personnel killed in the line of duty since September 11, 2001. More information is available here: www.UWSF.org 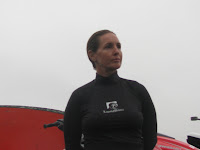 The 280 mile open ocean round trip personal watercraft (PWC) ride from San Pedro (Los Angeles, Ca) to San Diego, Ca and back in one day was done to augment visibility to The United Warrior Survivor Foundation (UWSF). A small group of accomplished PWC Racers and one Navy EOD Expert took to the water to accomplish one mission; complete the ride and bring visibility and donations to the UWSF. The ride was the brainchild of and orchestrated by Ms. Shawn Alladio, the legendary watercraft safety instructor and watercraft racer out of Southern California (she is also part of Liquid Militia and a PWCOFFSHORE.com Sponsored Offshore Racer). Alladio selected a very experienced group of offshore riders and started the preparation process months before the event. The United Warrior PWC Freedom Riders completed the final course and safety checks in Los Angeles, CA at Cabrillo Beach on 9/11.


These "Freedom Riders" on PWC made the trek on September 12th, departing San Pedro at 7:25 am. Departing the safety of the Angel’s Gate from the Los Anegles Port, they headed offshore into the Pacific Ocean and landed at a number of predestinated refueling stops along the southern coastal route.

Dave Tew from the Southern California Watercraft Club was there in force at the various checkpoints to assist with refueling the craft and rider support. Dave 'Pirate' Tew is also an Amateur Class Offshore National Champion PWC Racer. Mark Gerner of PWCOFFSHORE.com said "Dave was absolutely invaluable in supporting us, he spent his day driving from marina to marina, buying fuel and acting as our primary communications point, we could not have done the ride without him." 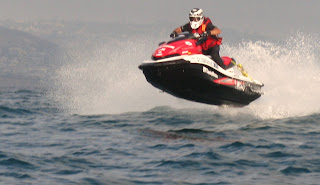 The riders had a small mechanical that was quickly and efficiently repaired by supporting mechanic Aaron Cress at Dana Point Jet ski and the riders were back on the water, gutting it out down to the next fuel stop and ultimately San Diego. Water conditions were mild for the ride down the coast to Oceanside but would slowly pick up momentum throughout the day.

Challenged Athlete Foundation representative Ryan Levinson met the group 6 miles off the coast of Mission Bay and provided the group with an honorary escort into San Diego and Coronado. After arriving safely at Coronado, the riders turned back to encounter higher winds and big seas. White caps started to present themselves off the coast of La Jolla and would continue to get rougher through the day, culminating with consistent white caps, high winds and 6 foot seas for the final leg from Dana Point to San Pedro. 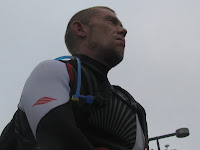 Ms Shawn Alladio would comment that "those ocean conditions were fitting for the event, the pain we felt is a reminder of the pain felt by the spouses who lost a loved one, one must continue forward." Almost 12 hours after the ride commenced, the group returned to San Pedro through rough waters, high winds and a magnificent sunset.

How can you support the UWSF PWC Freedom Ride? The initial fundraiser campaign has launched with a $2,000 charitable contribution to UWSF. Please support us in our goal of reaching $25,000 on behalf of those who have paid the ultimate sacrifice. Sponsor a charitable donation on behalf of the PWC Freedom Riders by making a financial contribution to the non-profit UWSF. Follow this link to their hompage: http://www.uwsf.org/ 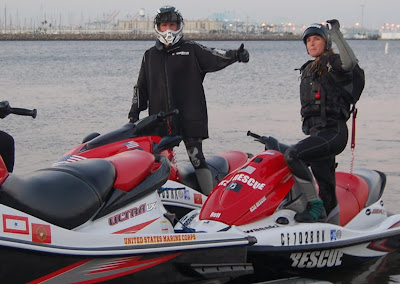 Steve was born June 24, 1965 in Baltimore, MD. He has served in the United States Navy for 21 years and is currently an E8 (Senior Chief) working in the Explosive Ordnance Disposal community. Steve has been affiliated with UWSF since 2005 and helped coordinate two very successful Coronado Golf Tournaments in 2006 and 2007. Steve was previously the UWSF Operations Officer but stepped back in 2008 due to military commitments and the arrival of his second child.

Currently a Federal Law Enforcement officer and Former Drill Sergeant amongst other service distinctions, Ralph is also a distinguished PWC Offshore Racer. He is on the PWCoffshore.com 'Gunz Group' race team and is a prolific supporter of endurance challenges. Ralph chronicles all his adventures and is currently scripting a book about PWC travels that will benefit Wounded Warrior Foundation. He along with his teammates are supporting the UWSF ride to help raise funds for the organization.

Former United States Marine Corps LCPL, HMM-268 39th MAG, 3rd MAW. 1986-1990. It’s an honor to have the opportunity to show my support on behalf of the United Warrior Survivor Foundation on our PWC Freedom Ride. ‘You have not been forgotten, and we will never forget.’

Personal Watercraft Boating Instructor for public safety agencies and special waterborne divisions of the US Army, USMC, USAF, US Navy and USCG. Founder of the K38 Way of Training that is represented in 14 countries worldwide. AWA H2O Responder program director, NSBC Instructor and Professional PWC Racer since 1989

How can you support the UWSF PWC Freedom Ride?

Sponsor a charitable donation on behalf of the PWC Freedom Riders by making a financial contribution to the non-profit UWSF. Follow this link: www.UWSF.org 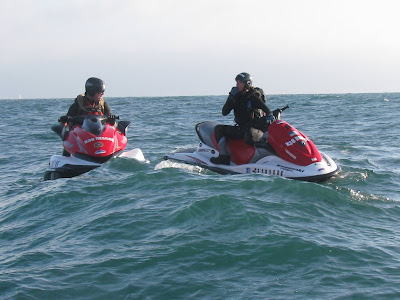 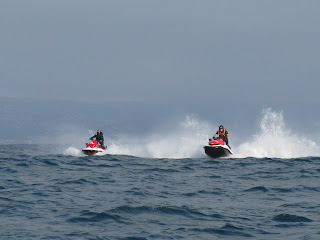