The 2013 Long Beach to Catalina and Back Offshore National Championship Race, aka "The LB2CAT"

The historic IJSBA Long Beach to Catalina and Back Offshore National Championship race aka “The LB2CAT” by Jettribe and RPM Racing Enterprises has challenged man and machine for almost two decades.  The sea state for this race across the channel is unpredictable and can be ocean flat (which is never completely flat) or exceptionally rough.  Rough seas can and many times has separated the men from the boys and the women ﻿ from the girls at this race.  The race starts and finishes at the helm of the historic Queen Mary in the Long Beach, Ca. harbor.  The race takes racers from the start behind the protection of the break wall into the treacherous and unpredictable channel between Long Beach and Catalina Island, 28 miles each way.  Racers must navigate to a small SeaTow turn boat off the coast of Avalon on Catalina Island and then return 28 miles back across the channel, through Queen’s Gate and into the Long Beach Harbor to cross the finish line behind the Queen Mary.  Many are intimidated by this race; intestinal fortitude prevails for those who choose to enter.


This year the seas would not disappoint, mother-nature would be alive to greet racers with a rough course for the majority of the course and 4-6 foot seas for part of the track.  Merely finishing this race was an accomplishment for the offshore racer.  ﻿﻿﻿﻿﻿﻿﻿﻿﻿﻿﻿﻿﻿﻿﻿﻿﻿﻿
The Kawasaki ULTRA 300X platform would continue to dominate this race with a sweep of the podium.  The multiple World Champion, former Triple Crown Champion and Monster Energy Kawasaki sponsored, PWCOFFSHORE.COM CORE Team member Craig Warner would take the overall win and Offshore National Championship on his Monster Energy Kawasaki ULTRA 300X with a time of 1:02:41, beating offshore teammate and veteran overall second place finisher Mark Gerner by 2 minutes and 50 seconds.  This would be Warner’s 4th overall LB2CAT title, tying legendary offshore racer and PWCOFFSHORE.COM Hall of Famer Billy Womack’s four LB2CAT titles.  Should there be one more LB2CAT overall win for Craig Warner, he will make additional history as the all-time LB2CAT title leader for the history of the LB2CAT Race.  This would be the second consecutive 2nd place finish for PWCOFFSHORE.COM founder and former Triple Crown Champion Mark Gerner behind Warner and third 2nd place ﻿﻿﻿﻿finish at the LB2CAT behind Craig Warner for Mark Gerner on his Steve Friebe built Kawasaki ULTRA 300X.
Third place overall would be achieved by three Time Vet-Master IJSBA World Champion and Iron-Man Triathlete KC Heidler.  All three of these racers comprise the CORE Team of PWCOFFSHORE.COM Racing piloting the Kawasaki ULTRA 300X resulting in a podium sweep for the PWCOFFSHORE.COM CORE Team and Kawasaki.  Craig Warner would say “PWCOFFSHORE.COM CORE Team, 1,

2, 3, there you go.”  Of special note was KC Heidler’s performance on the course with a healing broken leg and podium finish. ﻿

﻿﻿
The Amateur Open Class winner would be Santiago Kuan racing his Kawasaki ULTRA 300X, The Manufacture’s Stock Class would go to Michael Perry racing his Kawasaki ULTRA 300X and a very impressive 4th overall placing.  The Super Stock Limited Class would go to California racer Akira Tananka on his Kawasaki ULTRA 260X.  Kawasaki won literally every class of this race and nine of the ten spots in the top ten.  Former world and national ﻿ champion standup racer Tera Laho would be the sole woman racer on the course and would put in a very impressive top 10 (7th overall) performance on her Yamaha SHO, the only Yamaha to place in the top 10.  Liquid Militia Clothing would be there in force to support Tera prior to and during the competition.


﻿
The ocean would be large and confused, primarily located from the shelf forward located approximately 12 miles off the coast of the Long Beach break wall.  From that point forward the seas were confused, a result of converging swells and wind waves which would pick up and  get bigger as racers would approach Catalina Island.  This sea-state is technical and makes it difficult for racers to find their rhythm due to the unpredictability of what the water would do in front of his/her craft.  This sea-state would challenge man/woman and machine ﻿﻿


and reflects in the overall finish times for the race.  This LB2CAT race would not be given out this year, it would be earned and all racers are to be congratulated for taking on the challenge.  Eric and Jared Hardin would both put in impressive performances on their Kawasaki ULTRA 300X race-craft, Jared Hardin finishing with a top ten finish placing 9th overall.  Of special note is that one of the brothers, Jared did the Long Beach to Catalina Ski race the day prior to the LB2CAT PWC race, then competing in the LB2CAT PWC Race; an impressive display of endurance and athleticism.


PWCOFFSHORE.COM incurred the cost to put a helicopter, film crew and photographer in the air to film this epic race and keep it alive for 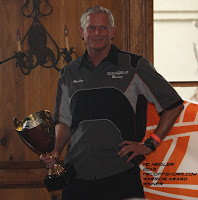 future generations to witness.  Sponsors are being pursued and required to ensure production, assist in offsetting the cost of DVD production etc.  Contact pwc@pwcoffshore.com for sponsorship of the DVD. 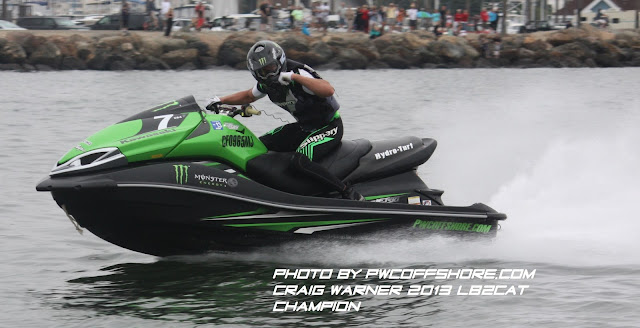 Below, Picture of Mark Gerner at 2013 LB2CAT on the Kawasaki ULTRA 300X 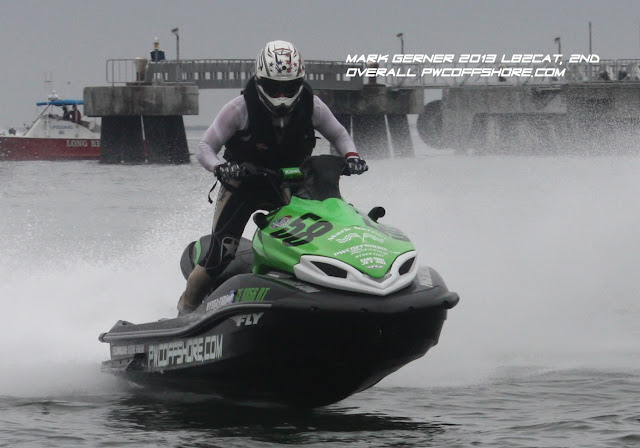 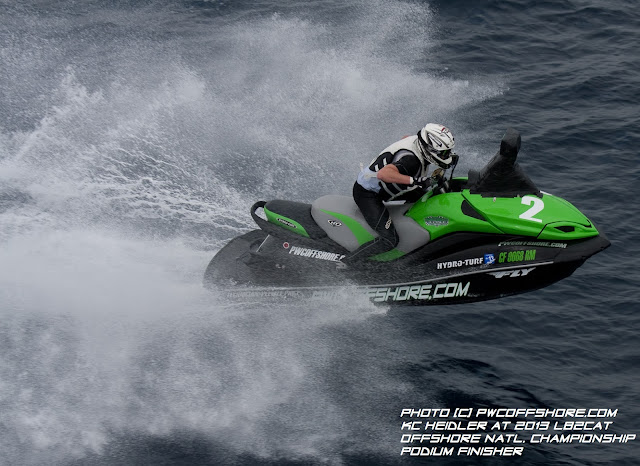 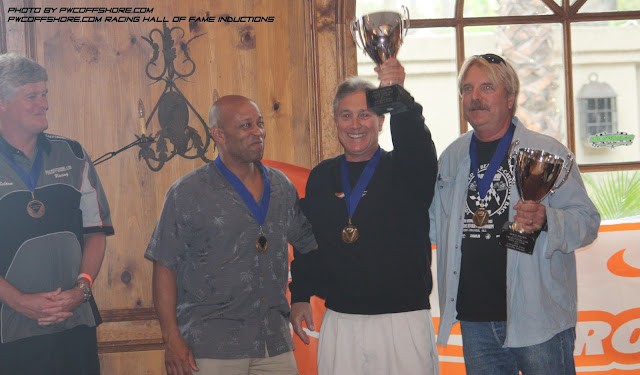 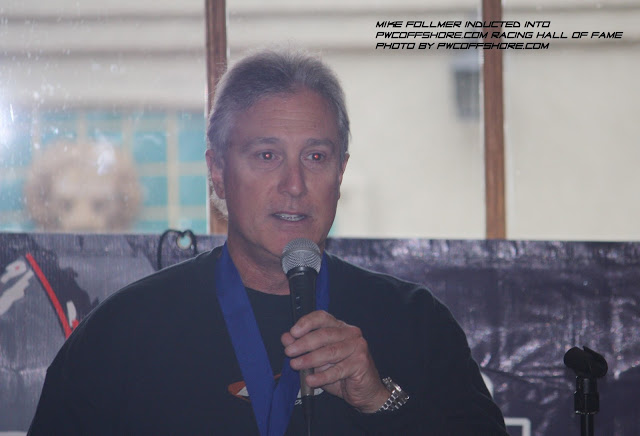 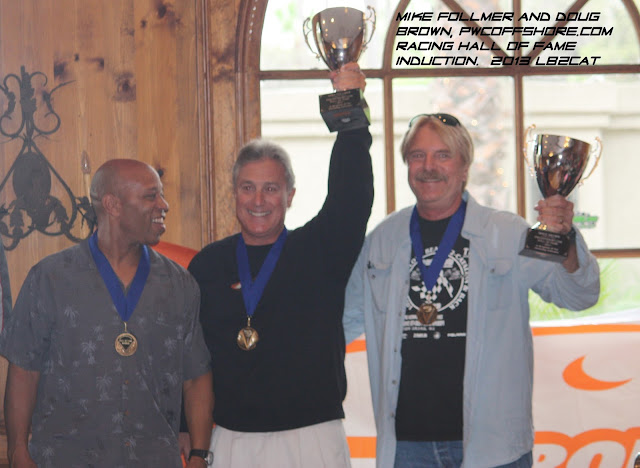 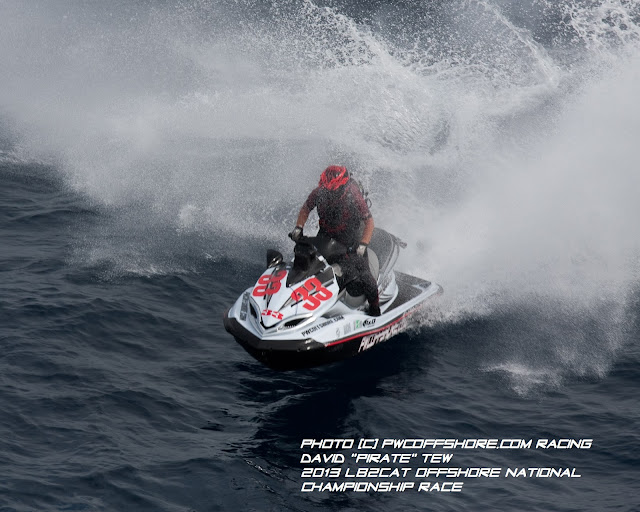 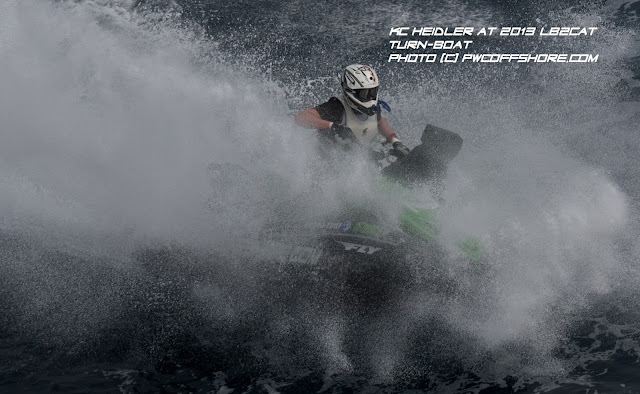 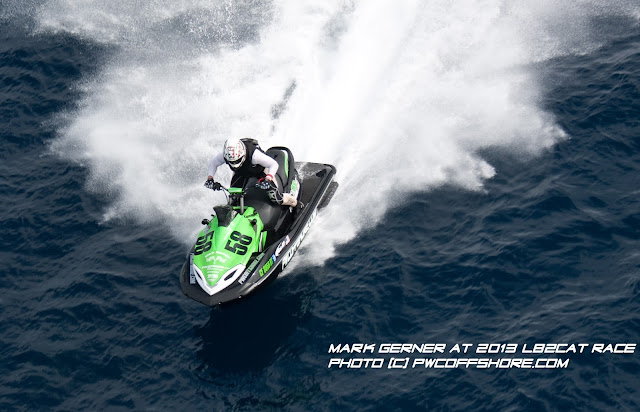 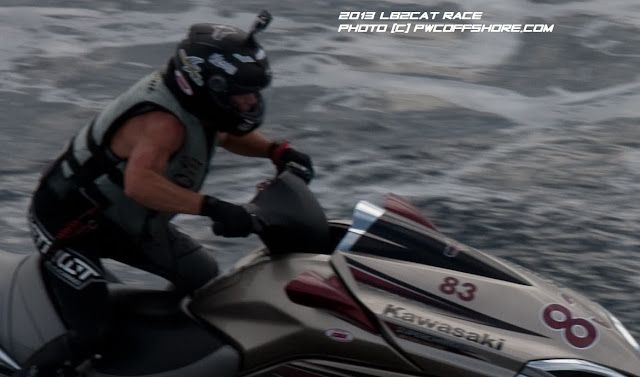 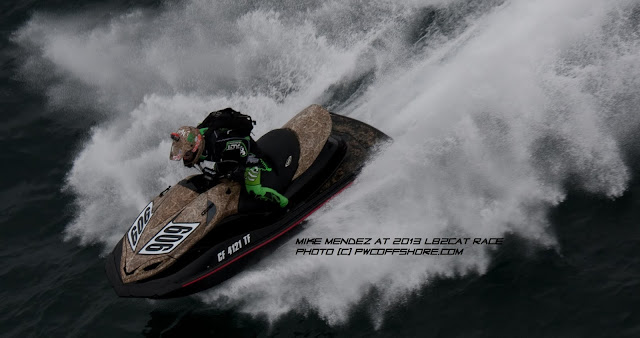 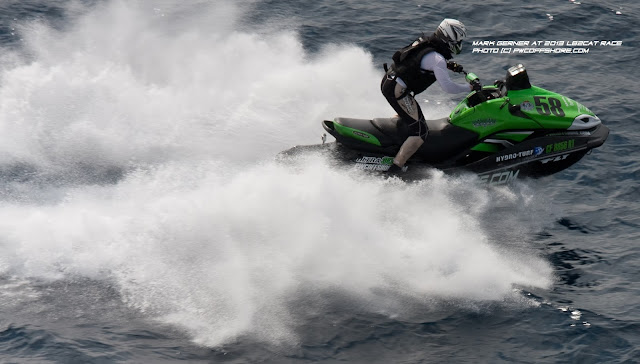 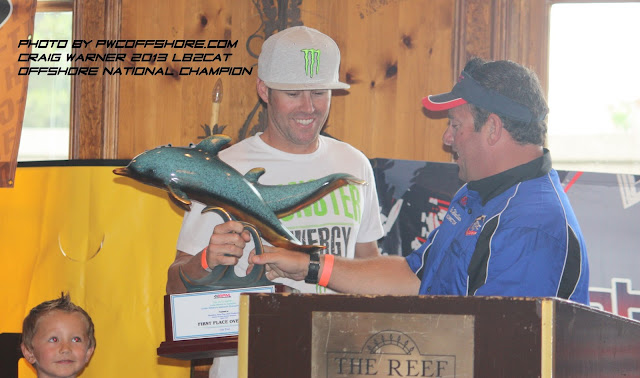 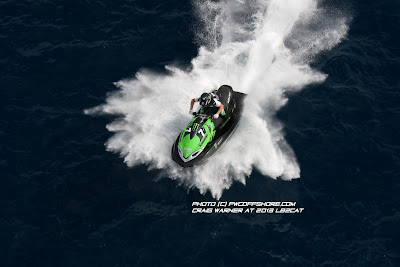 PWCOFFSHORE.COM CORE Team Sweeps Podium at the 2013, Fifty-Eight Mile Long Beach to Catalina and Back Offshore National Championship Race. All three of these racers were racing the Kawasaki ULTRA 300X. 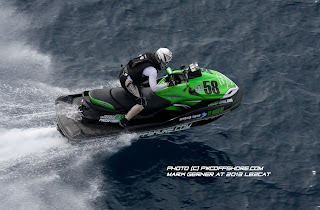 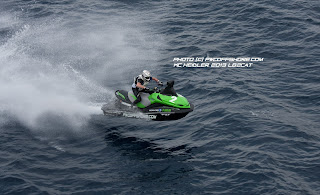 would take 3rd place overall on his Peewee Price built Kawasaki ULTRA 300X and did so on a healing broken leg! KC Heidler said “It was a good rough water race; it was great to see so many new faces on the racecourse competing for the win. Thank you Peewee Price for your tremendous support and building a competitive craft.” KC would also be awarded the PWCOFFSHORE.COM Racing Warrior Award for his overall contribution to our sport.

For more information about offshore racing, check out www.pwcoffshore.com 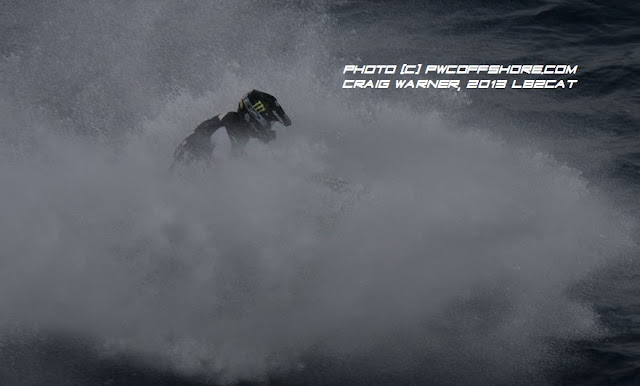 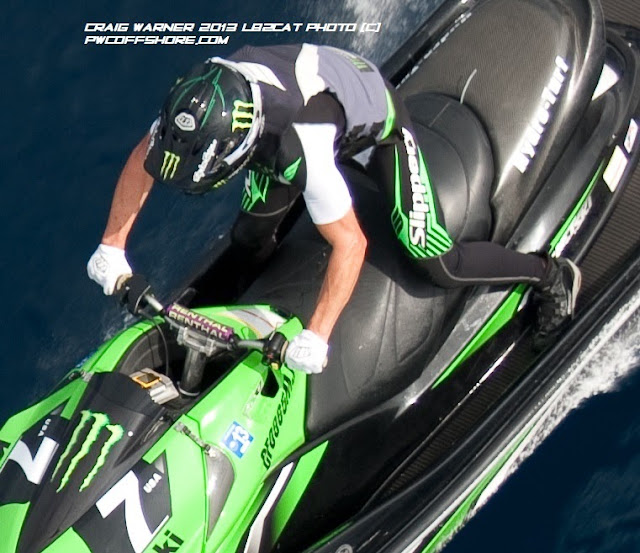 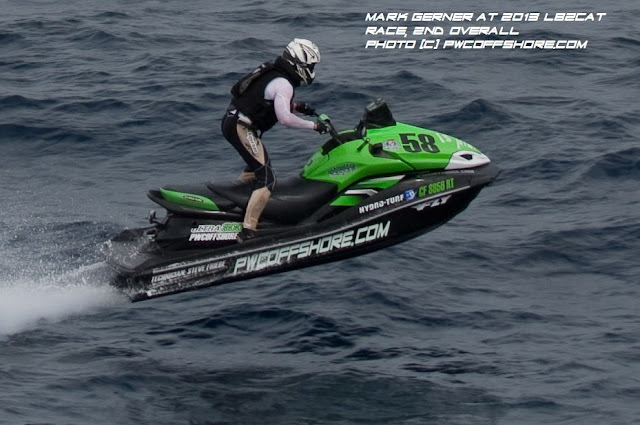 Posted by PWCOFFSHORE at 5:46 PM