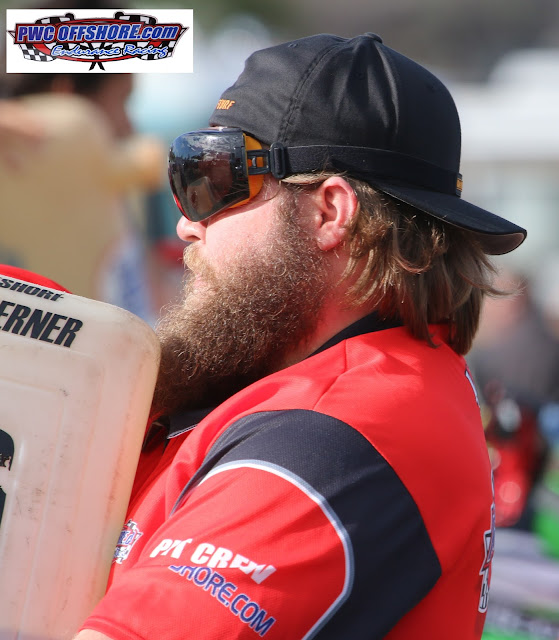 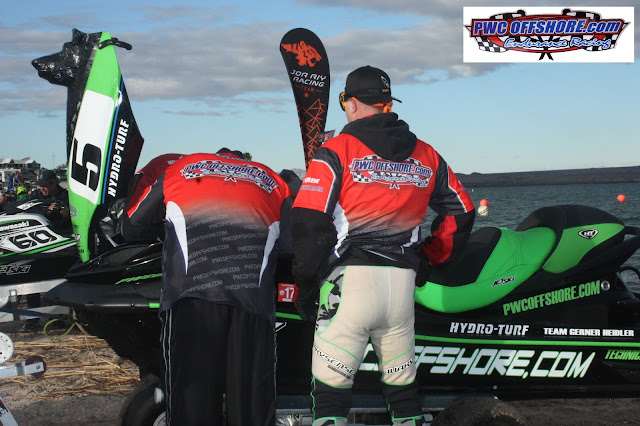 Team Gerner/ Heidler and the PWCOFFSHORE.COM Pit Crew of the United States brought two Paddock built Turbo powered open boats to the Hahn but made a last-minute decision to leave the Turbos on the trailer and opted for an almost stock Kawasaki ULTRA 310R. Why? The weather was calling for 24 mph winds and gusts up to 40 mph, the team would sacrifice speed for reliability in what was anticipated to be epic conditions. The veteran team was anticipating open boats being pushed to their limits in big water and breaking.
Those conditions came to fruition. Water conditions ultimately ended up ripping off PWC hoods, cracked multiple hulls and broke many craft. Undoubtedly, the 2017 Mark Hahn 300 Mile Race presented the most challenging conditions in the history of the race.
The Gerner/Heidler Team and Pit Crew was performing to plan until 1/3rd into the race when KC Heidler took on a number of very large wind waves (after turn three / light house) while pushing the envelope at 60 plus mph, something he has done many times before. For those that did the race they’re aware it was big and confused water around the point. Heidler was staying on top of the large wind waves but encountered an anomaly wave that he attributes to a large gust of wind. Heidler said “It happened fast, as I came off the boat and was
propelled forward over the handlebars; it felt like I got ejected from a jet fighter, I was in the air doing cartwheels for what seemed like forever and ending up hitting another oncoming wind-wave, I was underwater for a long time but my Lifeline vest flipped me over and popped me to the surface, the neck roll saved me I suspect.” The wind waves were blowing so hard that Heidler’s craft, now forty feet away from him was getting blown to shore and away from the racer. The racer went unaccounted for quite some time as he floated in the wind waves swimming to shore. A spectator witnessed the accident and ran down from the cliff area to catch his craft that was about to get driven into the shore and rocks from the large wind waves. The veteran racer swam to shore for “what felt like forever” and reunited with his craft. Over 35 minutes later from coming off the craft, Heidler was back in the pits and fueling area after remounting and riding back under his own power.

Although in pain, Heidler did not know his ejection from the craft resulted in a clean break fracture of his Fibula, the veteran racer cowboy'ed up and did seven more laps while in substantial pain on his broken leg . After being static and out of the race for well over 35 minutes due to the incident, the team still pulled off a 9th place overall finish. “That's not what we came here for, we came to win” said Mark Gerner, “knowing that KC raced with a broken leg makes me respect my race partner that much more, he didn’t tap out, that’s outstanding and sheer mental toughness to continue on with a broken leg in those water conditions. I suspect those that did this race in those conditions will appreciate what he endured during those seven laps after he broke his leg. Regarding the incident, after he went unaccounted for so long, candidly I became very concerned for his well-being, I’m very happy it wasn’t something even worse.”
This event has led many to conclude that orange colored helmets may be the best approach for offshore and endurance PWC racing. Heidler was in the water for quite some time floating in the large wind waves with multiple (3) rescue craft the race staff called in and rushed to his vicinity to search for him based on a report from a spectator that there was “a racer in the water not moving after a bad crash.” Heidler states that the safety boats were very close to him aggressively looking for him per the race director's safety protocol but could not see him due to the large wind waves and white caps he was bobbing in; his white helmet was hard to see with the large wind waves and white caps in that area. Utilizing bright orange helmets could make down racers more visible to safety personnel, especially when the water is heavy as it was on race day. We suspect this incident will result in additional safety measures and protocols with PWC helmets.
As always, the PWCOFFSHORE Pit Crew performed flawlessly with sub one minute pit stops, no fuel spills and complete professionalism. Mark Gerner said “they’re the best in the business, they now set the standard.” Steve Rasmussen was voted by his peers to be the PWCOFFSHORE Pit Team MVP and was awarded the MVP trophy by Pit Team Leader Mike Arnold at the team’s post-race event.
Of note, KC Heidler is already joking about his custom workout regime that he's created while wearing a cast for eight weeks. "I'll be good as new in no time" Heidler said.
Another great day of racing, gotta love it.  For more information about offshore and endurance racing go to www.pwcoffshore.com 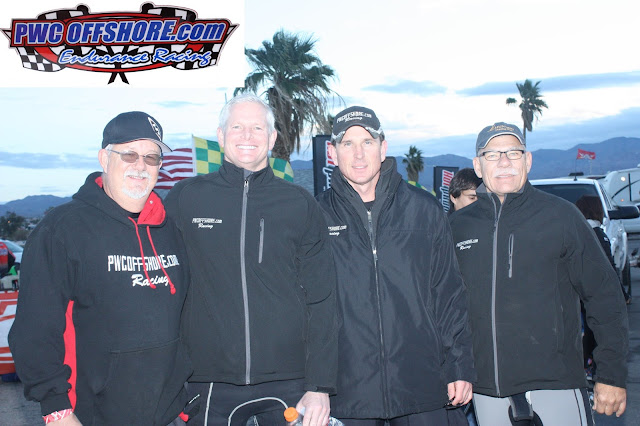 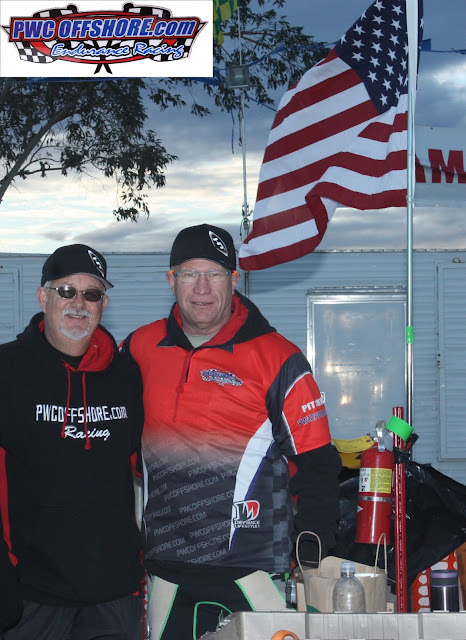 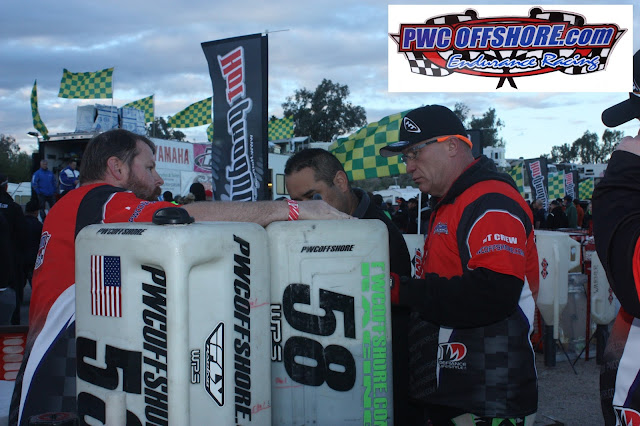 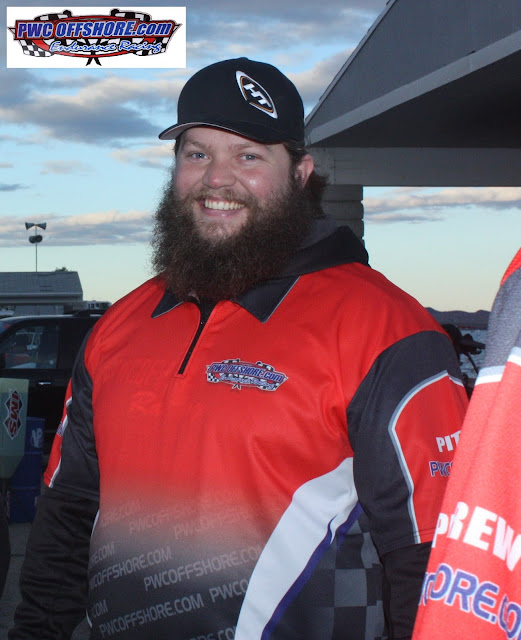 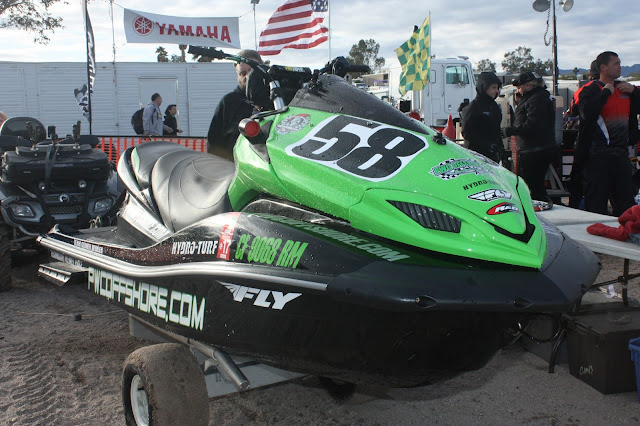 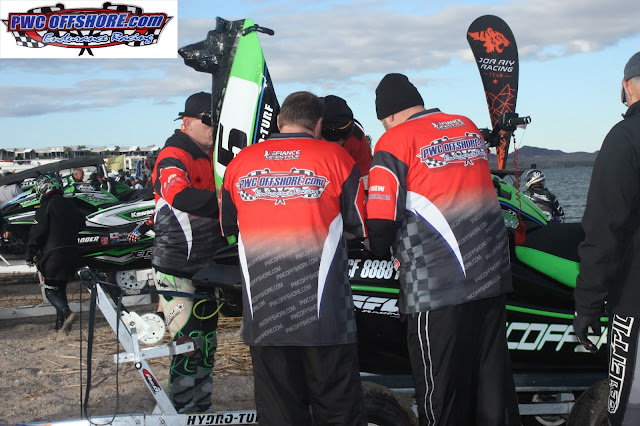 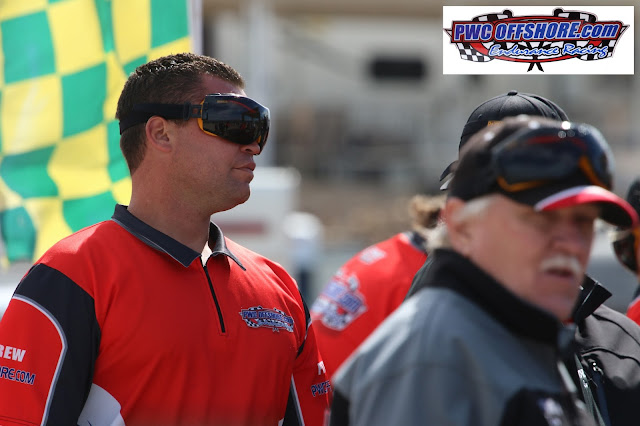 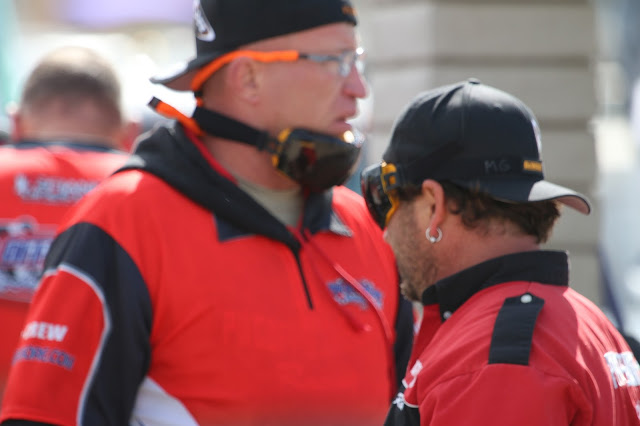